You are here: Home » Latest News » Commercial disputes: The cost of Court Claims

Actons Dispute Resolution team recently ran a number of seminars advising organisations on how to manage commercial disputes, should one arise.

Although undesirable, court proceedings are often a reality for many organisations that find themselves involved in a dispute. Therefore, awareness of court procedures and what to expect during the process is vital in ensuring claims are handled effectively and successfully.

During the sessions, we asked attendees a number of questions on the topic of commercial dispute court claims in order to gather a general understanding of how they would deal with the claim. Responses were monitored through an anonymous live polling system.

On the topic of the costs involved in issuing court claims, we gave attendees a couple of cases with case values and asked them for their thoughts on what the cost of issuing a claim for each one would be.

As the figures below show, the majority of attendees were correctly able to identify the cost of a large value claim. For claims over £10,000, the court issue fee is £2,750 or 5% of the amount being claimed, subject to a maximum of £10,000. 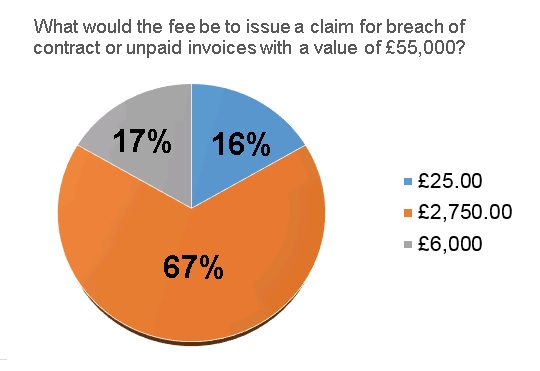 One thing that is clear is how costly issuing a claim for a commercial dispute can be.

Should you find yourself in a position where issuing court proceedings is necessary, or to avoid requiring court involvement altogether, speak to a member of our specialist Dispute Resolution team. Getting expert advice as soon as possible can save your organisation time and money by ensuring resources are used efficiently and effectively.